Okay, not the most original title ever conceived.  But we were in Seoul, and we were searching, so the title fits.

Despite living in South Korea for nearly nine months now, Melanie and I had only been to Seoul a total of four times between the two of us.  And most of those trips were to the Incheon Airport to either go somewhere else or pick someone up.  So we decided to pick a weekend and just go.  I had made some arrangements with a friend, Birds Korea member, and fellow eBirder, Bradlee Sulentic.  Another Birds Korea member, Jason Loghry, would meet up with us.  We would spend one day at the Korea National Arboretum (국립수목원-구, 광릉수목원), and the second day would be put aside to do the more touristy things that I often neglect on my obsession-driven “holidays.”

The plan was to meet up at around 6:30am, then head over to the Arboretum and spend the day.  So of course Melanie and I missed our transfer on the subway, ended up heading northward out of the city, then finally realized our mistake and took another train heading back the way we had come.  We arrived at the pick-up at around 7am, only to discover that Seoul traffic had held up our companions, so we actually didn’t arrive at the Arboretum until almost 9am.  Which was perfect, actually, since the gates just opened moments earlier, so we had the place relatively to ourselves.

A quiet side trail at the Korea National Arboretum.
The weather’s not looking too good right now…

That’s right around the time the rain started.  A little sprinkle at first.  Then some misting.  More sprinkles.  Then just rain.

Three hours into the birding, and we had seen only a handful of species.  Top on the list was a flock of nearly twenty hawfinches, but mostly just a lot of noisy brown-eared bulbuls and a few large-billed crows.  As Melanie was deciding to head back to the car and dry off for a bit, we got a call from Jason that he had located a Eurasian eagle-owl perched in a tree!  So off we ran into the woods to find him.  A more miserable and pathetic looking owl I have never seen.

It was at this point that we took our cue from the eagle-owl and headed to warmer and drier locales.  The Arboretum has a nice coffee shop, where you can pick up a latte and some snacks while overlooking a tranquil lake.  Despite the rain, the changing colors of the leaves gave the whole place a lovely atmosphere, and a hot caramel macchiato doesn’t hurt either.

We are not impressed with the rain.
Myself with fellow eBirder Bradlee Sulentic

Eventually, and by eventually I mean nearly 5 hours later, the rain stopped.  It never got sunny, but at least it wasn’t a torrential downpour anymore.  The birds seemed to like the change in weather too, because the activity really picked up in the afternoon.  While Melanie decided she had had enough of the cold, and happily read her book in the café, the three intrepid birders returned to the forest and continued the search.

Bradlee and I went to follow up on a sighting Jason had made earlier.  In a large mixed-species flock of birds, we found nearly a half dozen yellow-bellied tits feeding with Japanese tits and coal tits.  This species has been expanding its range; it was considered an endemic species to eastern China not a decade ago.  Now it’s starting to move into the Korean peninsula and northward into Mongolia and Russia.  This was easily the highlight of the trip for everyone.

Walking back towards the entrance to the Arboretum, Bradlee and I stumbled onto a Eurasian treecreeper, which was a bird I had more or less given up on finding in Korea.  It looks extremely similar to the brown creeper of North America, and it represents only the second member of family Certhiidae to grace my Life List.  Further down the trail we found a grey-capped woodpecker, another difficult bird to find in Korea.

Before calling it a day, we scoured the edge of a stream running along the border of the Arboretum.  Bradlee swore this was a perfect site to find solitary snipe, if not one of the best spots in the world.  We had been over the stream three times with nary a snipe to be seen.  Then Jason called in and said he had found one hidden in the grasses along the bank.  So we grabbed Melanie from her cozy roost in the café and made for the stream.  And just as Jason had promised, we spotted a solitary snipe foraging along the water’s edge…by itself, as its name implies. 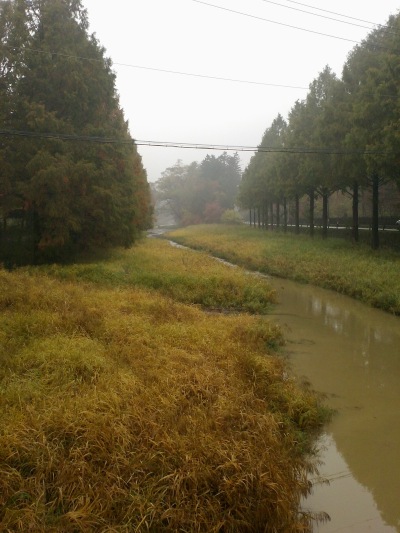 This stream running along the edge of the Arboretum is reportedly one of the best places anywhere to see solitary snipe.  That is, if you are keen enough to spot this cryptic bird amid all the rocks and grasses.

We ended the day on a high note.  I had tallied four lifers (yellow-bellied tit, grey-capped woodpecker, Eurasian treecreeper, and solitary snipe) and got some excellent views of some amazing birds.  Melanie counted two lifers (Eurasian eagle-owl and solitary snipe), and though she never was able to shake the chill from the rain, she did enjoy hanging out with some great people.

See the full eBird report for the day here.

Join 61 other subscribers
Follow On the Wing on WordPress.com
From Snow to Sand: B&T Adventures
The New Shorebirds Handbook Blog