It’s the rainy season here in South Korea.  This year is being called the dry rainy season; it rains, but not nearly in the quantities that are normal.  Most days are characterized by overcast skies and that hanging feeling – it’s really humid and feels like it will pour at any second, but it doesn’t.

Not the kind of weather you want to go birding in.

I had been antsy the past few weeks.  I hadn’t been getting out much, I hadn’t been photographing much, and I hadn’t birded at all.  So despite those ominous clouds on Saturday morning, Melanie and I headed out to Gwangjuho Lake Ecological Park, hoping a change in scenery might do us some good.

The Eco-Park had undergone some “improvements” since my last visit a few months ago.  Several sections had been landscaped and replanted; in usual Korean style, it had been started and finished in a matter of days and there was no trace that anything had been done. 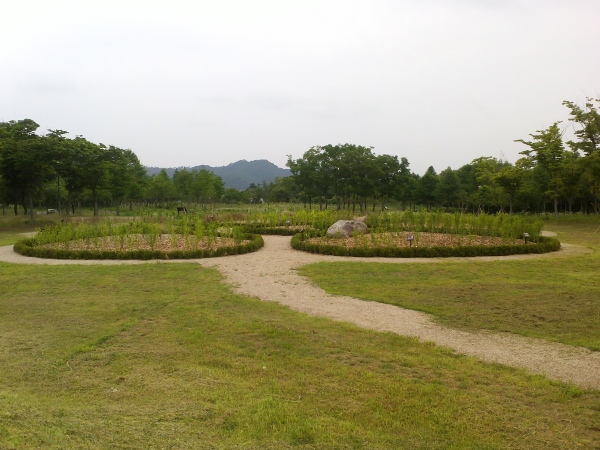 New plantings at Gwangjuho Lake Eco-Park.
This area had previously been an empty meadow just a few weeks ago.

The park held several families of azure-winged magpies.  We saw numerous adults foraging for food to bring to the gaping mouths of their offspring.  One group of four fledglings mobbed their parents whenever one of the adults came in with food.  Even among siblings, competition for food is fierce.

An adult Azure-winged Magpie, looking for food in the humid afternoon

There was more evidence of successful breeding throughout the park.  We saw several small groups of juvenile Japanese tits flitting about in the trees.  Near the entrance to the park were two juvenile grey-headed woodpeckers, the likely offspring of the Eco-Park’s resident pair.  These younger woodpeckers lacked most of the adults’ green coloration, appearing overall grey with a hint of green on the tail feathers.  The two juveniles kept in constant contact with each other and the adults by making short whistles.

We continued deeper into the park, finding small numbers of birds in little pockets throughout the area.  A large flock of vinous-throated parrotbills, full of juvenile birds, was the biggest single sighting we had all day.  The flock numbered around 40-50 birds; not an uncommon number for this time of year.  The boardwalk around the northern edge of the park was very quiet, with only a few Japanese tits and passing oriental turtle-doves. 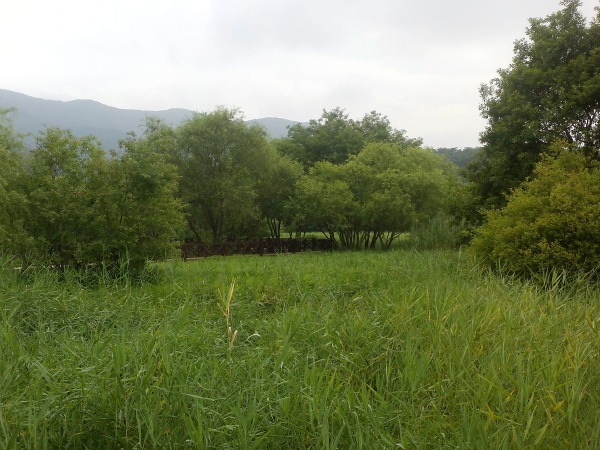 A section of the boardwalk.  There was very little water here, despite the extensive growth of reeds and grasses.

Gwangjuho Lake itself was a shadow of itself.  The water level was down tens of meters, with an exposed lake bed stretching off into the distance.  Most of this muddy, nutrient-rich land had transformed into a field of low vegetation.  Gwangjuho Lake is artificial, serving as a primary reservoir for the surrounding area.  The water is used for drinking and agriculture, and its low level reflects the planting of the first round of rice for the growing season.

At the distant edge of the water we could see grey herons, great egrets, and little egrets taking advantage of the newly exposed mud.  Little ringed plovers, a breeding shorebird in the park, could be heard calling intermittently from across the lake bed.  We even spotted an immature Eurasian hobby patrolling the area, and making a successful grab at an unidentified prey.

Hidden in the short vegetation on the lake bed were small damselflies.  It seemed like there were thousands of them, quickly flitting about and disappearing in the greenery.  Larger dragonflies, namely black-tailed skimmers and wandering gliders skimmed across small pools of water.  We found numerous exuviae in the mud, evidence that many of the dragonflies we saw were newly emerged adults.

We completed our loop around the Eco-Park, scoring a few more species for our efforts.  Black-naped orioles were singing lazily in the humid air.  A family of bull-headed shrikes chased one another around, and juvenile pale thrushes begged for food from a single adult bird.  We took a break from the heat near a grove of metasequoia trees, lounging in the shade as the heat of the day wore on. 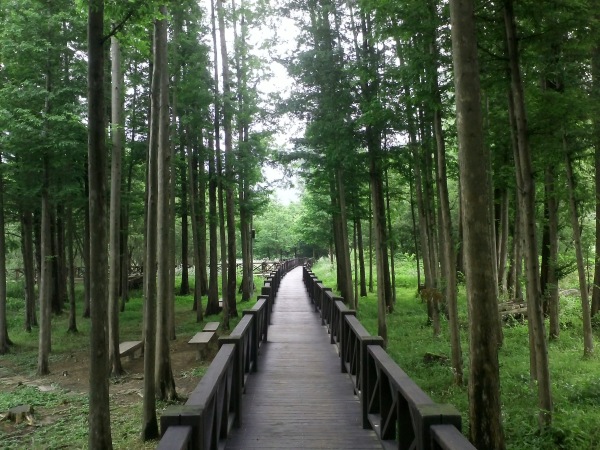 The Metasequoia Grove at Gwangjuho Lake

On our way out of the Eco-Park, I noticed a small black dragonfly perched on some tall cattails by one of the lily ponds.  It turned out to be a butterfly skimmer, one of my favorite Asian dragonflies.  Also flying around the cattails were two species of damselfly, both identified only by their Latin names.

After spending several hours at the Eco-Park, Melanie and I decided to visit one of the small restaurants across the street from the Park entrance.  We had discovered a small place during our last visit, which makes an excellent pajeon (파전).  Pajeon is a type of pancake, whose main ingredient is green onions.  A good pajeon will have grilled onions, green onions, maybe some peppers, and usually a type of seafood like calamari.  For a mere 8,000W (~$8), we got a huge pajeon and several side dishes (as is Korean custom). 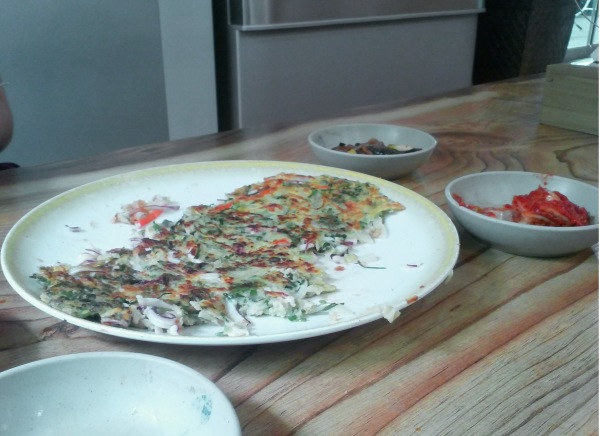 Our half-eaten pajeon with a few side dishes.  This delicious Korean pancake doesn’t last long…

Before heading back home, we decided to stroll around Chunghyo-dong and see the many rice paddies in the area.  The rural area in Chunghyo-dong is much like rural areas anywhere in Korea: rice paddies stretch off into the distance and take up any flat land that is available.  I’ve often thought of Korea as having only three habitats: city, mountain, and rice paddy. 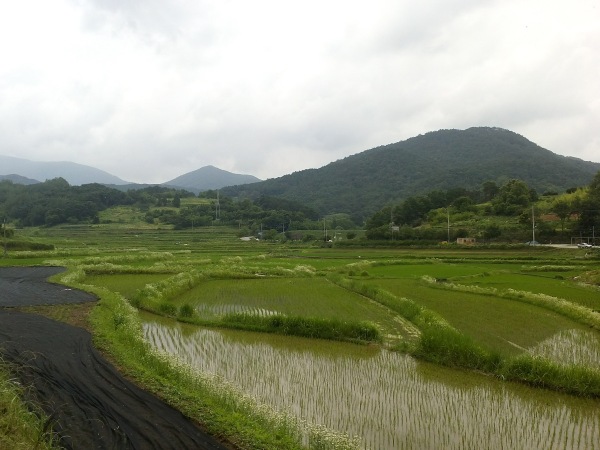 However, the monoculture of rice paddies can be deceiving.  Wildlife still manages to keep a tenuous toehold in this environment.  Herons like striated heron, cattle egrets and great egrets make use of the shallow water to catch small fish and crustaceans.  Grey wagtails can be found along the drainage ditches connecting the separate cells of the paddies.  We even discovered four dollarbirds perched high above the rice paddies, scanning the area from a high-voltage power line that straddled the mountain valley.  Insects like dragonflies and damselflies also benefit from the shallow water, using the sheltered paddies to lay their eggs.

The highlight of our walk through the rice paddies was an adult Chinese sparrowhawk.  I’ve seen this species several times before, but always soaring high overhead.  This was the first one that I’ve found perched, and so was able to get a few photos before it flew off.

After spending nearly half the day in Chunghyo-dong, we caught the hourly 187 bus back to Gwangju.  Overall we observed 32 species of bird, 7 species of butterfly, and 10 species of dragonfly and damselfly.  A complete list of the birds seen can be found here and here.