This past weekend I led an outing to Haenam County, under the auspices of the Gwangju branch of Birds Korea.  Nine people turned out for a day-long tour of the “Kimchi Capital of Korea.”  But it wasn’t the endless fields of cabbage that brought us to Haenam:  every year, the majority of the world’s population of Baikal teal come to this place to spend the winter months, forming enormous flocks that contain literally hundreds of thousands of ducks.

I took my group around Haenam county, checking out the hotspots like Gangjin Bay and Gocheonnamho Lake.  Waterfowl of all types come to the waterways in Haenam, and by the end of the day we had tallied 62 species of bird, including unexpected birds like brown-cheeked rail and merlin.  But it was the teal we had come for, and it was the teal we would find.

I knew of a spot on the expansive Geumho Lake, where I had seen nearly 90,000 Baikal teal the previous year.  As soon as we arrived, we saw a small group of Baikal teal in a canal, leading to the main body of Geumho Lake.  There were only a few hundred of them, but they were close to shore and allowed us some excellent views of these beautiful birds.

As we watched, I became aware of a low humming sound, like the sound a highway makes from a distance.  But there are no highways near this portion of Geumho Lake, so what was making that sound?  We continued on towards Geumho Lake, and reaching a small berm on the shore, we discovered the source:  the lake was covered with teal, all murmuring to one another!

The dark line, that appears to be dry land, is actually tens of thousands of Baikal teal

As we watching, stunned into silence, the dark line on the lake began to take to the air, as steam rises from a river in winter.  What appeared to be like dark smoke over the water was revealed to be thousands of teal through the binoculars. 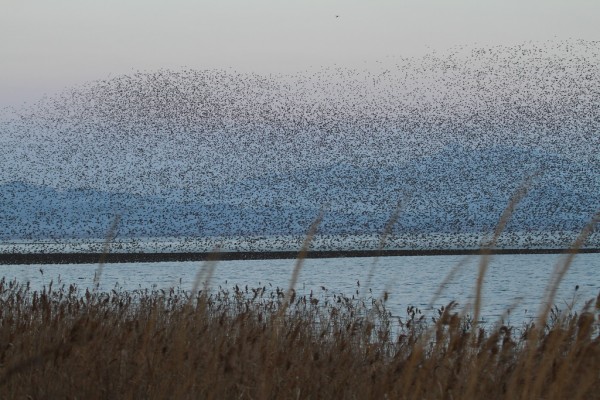 When birds form large flocks, and take to the sky as one mass, it is called a murmuration.  Starlings in Europe are known to form large murmurations that act just like a school of fish swimming in the ocean.  Murmurations function as excellent defense against would-be predators:  when faced with literally thousands of targets all moving together, a predator is overwhelmed and usually ends the attack.

A panorama of the murmuration

The photos don’t really do it justice.  The mind reels as it tries to grasp what it sees before it.  As the sun descended and darkness began to creep over the horizon, we estimated there to be at least 200,000 Baikal teal, though it’s arguable that there were more like 300,000.  We were looking at the bulk of the world’s population of this species, all on a single body of water!

It’s moments like this that remind us all that, while we may be the dominant life form on the planet, we are but one species among millions, each as unique and spectacular as ourselves.  I challenge all of you to go out there and find something amazing…you’ll be surprised how easy it is to find, if you have the eyes to see.

Join 61 other followers
Follow On the Wing on WordPress.com
From Snow to Sand: B&T Adventures
The New Shorebirds Handbook Blog