To me, one of the most positive qualities of human beings is our ability to show compassion to other species.  Altruism within a species is fairly common (for a variety of reasons), and while seeing a young teenager help an old woman carry groceries to her house may give me that Hallmark feeling, it isn’t really that unusual.  But far fewer organisms show this same altruism to members of a different species.  Humans are unique in that regard – only a handful of species (some primates, dolphins, dogs, etc.) exhibit this behavior, so it could be said that it is one of the things that separates humans from the other animals.  On a personal note, I really dislike that statement, since it implies that humanity is somehow above or better than other organisms, and I feel that most of the world’s environmental problems would be solved if we realized that we are NOT above or better than the world around us.  But that’s not the point of today’s post, so let’s move on.

I’ve worked with birds in a variety of ways.  While I list them and photograph them in my spare time, I’ve actually worked with birds one-on-one, through a variety of research projects involving point-counts, mist-netting, and nest searching.  I’ve been trained on the proper way to handle birds of all species, how to go about searching for and monitoring nests with a minimum of interference, and how to recognize stress behaviors in birds.  Therefore, I’ll begin this post with the old adage don’t try this at home, I am a professional.

Melanie and I were biking along the northern shore of Kinmen.  As we turned a corner, I noticed a small dark shape sitting on the road.  Traffic in Kinmen is not what you would call “busy,” but nonetheless there are tour buses and construction vehicles that are very large and move very quickly.  Needless to say, the road is not the kind of place where one takes a nap.

I quickly identified it as a juvenile greater coucal, and my initial impression was that it had been hit by a car.  We’ve all seen enough roadkill in our lives to know the end result of vehicle vs. Nature.  I was expecting to find a mangled wing, and the realization of what would have to be done next started to gnaw at my insides.

To my (very relieved) surprise, when I approached the bird I did not find any obvious sign of injury.  It turned its head to look at me, but did not attempt to escape.  Not the best of signs, but not the worst, either.  It appeared to me that the bird was either disoriented or exhausted, as evidenced by its open mouth and slight panting.  If nothing else, I decided to move the bird to a more shaded area, where it could cool down instead of baking in the blazing sun on sizzling asphalt.

Coucals are medium-sized ground cuckoos.  They have strong legs and talons, although they are not as sharp or long as a hawk’s.  Still, care needed to be taken when handling the bird; even an accidental scratch by a sharp claw is enough to break the skin and cause a serious injury.  Fortunately for me, the coucal made no fuss, and allowed itself to be picked up and moved off the road. 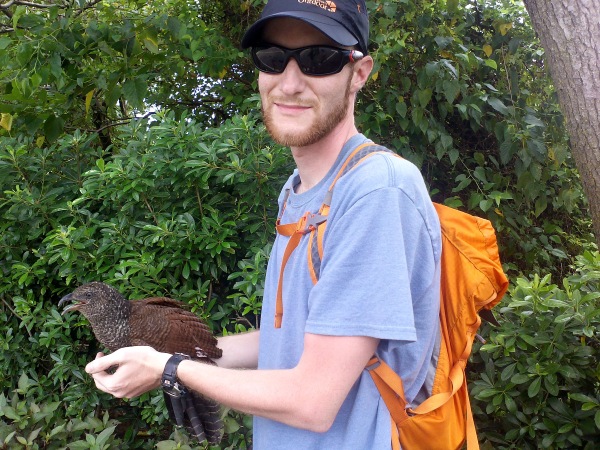 Once we were off the road, I gave the bird a quick look-over.  I gently stretched each wing, to ensure that there were no broken bones.  The coucal did not show any sign that this caused any pain or discomfort.  All of the feathers looked in good order, there was no blood or other sign of injury, and the wings could be moved easily.  The coucal also kept a firm grip on my hands.

With no indication of injury, I placed the bird into a small opening in the vegetation.  The spot was well shaded by the trees, and provided some cover so the coucal would not be obvious to any predators.  I also used my water bottle to give the bird some quick drinks of water, which it lapped up readily.  After about 10 minutes or so, the bird closed its mouth and began looking around again.  It seemed much more alert, and when a large dump truck cruised by where we were standing, it jumped into the bushes and disappeared.

My educated guess is that the bird, being a first-year juvenile, may have overexerted itself in the hot weather, and suffered sun stroke.  Having nowhere else to go, it landed on the only open place it could find, which happened to be the middle of a road.  It’s not worth thinking about what would have happened had Melanie and I not come by when we did.

As I have already mentioned, I am trained in the proper handling of birds.  I do not recommend handling any wildlife that you may come across, both for their safety and for your own.  If you come onto an injured animal, contact a local wildlife management agency, a wild animal care center, or your local police station.  The point is, do something.  Making a quick phone call to save an animal’s life is hardly a difficult thing to do.

Before disappearing into the brush, the greater coucal allows me to take a quick portrait.

Best wishes to my new friend, the greater coucal, and here’s hoping you lead a long and healthy life.  Stay away from those roads!

2 thoughts on “Saving the Coucal”