Melanie and I recently had a few days off from school, during the Korean holiday of seokga tanisil (석가탄신일), more commonly called Buddha’s birthday.  This holiday is one of the main travel times in Korea, with many people traveling to visit family and relatives.  Any tourist destination is usually booked solid, as was the case in Busan this year where literally every hotel, hostel, pension, and jimjilbang in the city were sold out.

So rather than fight the crowds and traffic, we chose to leave mainland Korea and spend some time exploring one of the country’s numerous offshore island communities.  We chose Eocheong-do (어청도), a small island approximately 70 kilometers west of the port city of Gunsan-si (군산시).  Here are some logistics.

Being an island, the only way to get to Eocheong-do is by ferry.  Ferries depart once daily during the week, and twice on Saturday and Sunday, from the Gunsan Coastal Ferry Terminal.  During the week the ferry departs at 9:00AM; on weekends you can choose between a 7:30AM or 1:30PM departure time.  However, ferries are often cancelled due to fog, rough seas, or bad weather, so be sure to check the weather before leaving the mainland.  The ferry ride itself lasts about 2½ hours, with a short stop at nearby Yeon-do (연도).  Tickets for a one-way trip will cost around 25,000 won at the time of this writing; these tickets can be ordered ahead of time by phone or online, but unless you have a solid grip of the Korean language, it’s best to buy your tickets at the Ferry Terminal the day of your trip.  You will need a valid photo ID to board the ferry; for non-Koreans, a passport or Alien Registration Card (ARC) will suffice.

Eocheong-do is a small island community, with a population of only about 400 residents.  As such, don’t expect any 5-star hotels with room service on this trip.  However, minbaks (민박) are plentiful and affordable throughout Eocheongdo-ri, the main village on the island.  A minbak, or “homestay,” is a bed-and-breakfast style accommodation, with a traditional Korean feel.

Expect a sleeping mat, blankets, and an ondol-heated floor in place of a bed; however, some minbaks may offer Western-style beds for an additional cost.  This may seem frightening at first, but minbaks are usually very clean and comfortable, and the owners are always friendly and helpful, even if they do not speak much English.  Prices range from 10,000 won per night to upwards of 40-50,000 won for more popular tourist destinations at peak travel times; in some cases you can even negotiate a price with your hosts.  In many cases, a minbak will also have a restaurant attached, or be located close to one; you are not obligated to eat there if you do not want to. 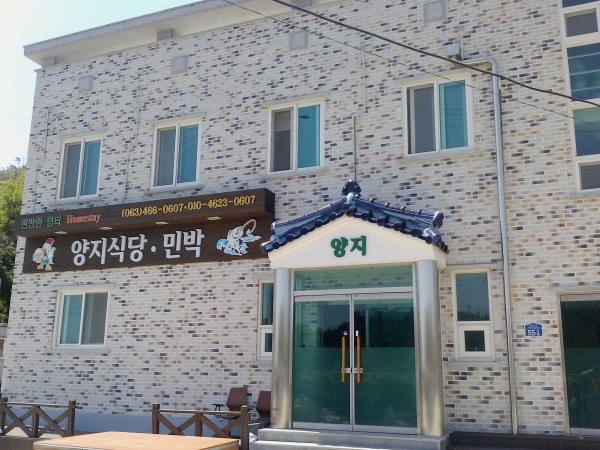 The Yangji Homestay on Eocheong-do.  The restaurant on the main level serves excellent fried chicken.

The island is shaped like a crescent, and has a steep ridge running along the edge.  Half of the island is part of a military base, and is fenced off to the general public and visitors.  However, the remaining half of the island is lined with hiking trails.  The village of Eocheongdo-ri, though small, offers a variety of restaurants, a large public pavilion, a church, a seaside boardwalk, a lighthouse, and numerous gardens through which one can meander.  The residents of the island are especially friendly; don’t be surprised if you’re invited for a drink or a meal by a total stranger.  Koreans as a people are still very curious about foreigners, but unlike most places I’ve traveled to within mainland Korea, the people of Eocheong-do are far more polite about their curiousity.  I did not find that anyone stopped and stared at me, or was even all that surprised to see me.  If anything, people treated me as though I was just another resident whom they hadn’t seen in awhile.

The boardwalk, opposite the marina

The lighthouse on the western end of Eocheong-do

The main reason to go to Eocheong-do is for the birding.  Its position in the Yellow Sea makes it an oasis for migrant birds flying from China to the Korean peninsula.  Eocheong-do is well known in Korea and elsewhere as a hotspot for birding during the spring migration.  Many rare and accidental species have been documented here over the years.  In fact, birding-based ecotourism is starting to catch on, and the island’s economy is shifting to promote its natural treasures.

Our visit to Eocheong-do was immensely relaxing, and the birding was some of the best I’ve had anywhere in Korea (where else can you see 100 species in just a long weekend?).  I’ll post about our birding experiences in another installment.

Join 61 other followers
Follow On the Wing on WordPress.com
From Snow to Sand: B&T Adventures
The New Shorebirds Handbook Blog